When thinking about gender, about what it is (or rather it is not) and of the misconceptions that ground its very idea, I always like to start from my own confusions and of a time when they were starkly brought to light by the question of transgenderism. A few years ago, I was in the car with M when an interview to a transgender man, F, aired on the radio. Among other things, F talked about his cisgender girlfriend. For some reason or another, I had never even thought of the fact that, thinking of myself as a man who is attracted to women, one day I could fall in love with a transgender woman, or more mundanely, end up in bed with her, or could I? or would I? I immediately asked M if he would have sexual intercourse with someone who had had gender reassignment surgery (GRS) and we started discussing the matter. My main source of worry at the time (for which, now, is hard to hide a good deal of shame and self-reproach) was that I thought that a transgender woman would still be somewhat of a man, probably somewhere in her head. My thinking went as follows: I thought of myself as a man, ‘a man is who I am’ I thought, and taking some pills and changing my penis into a vagina wouldn’t change who I am ‘deep down’ or, if you prefer, ‘somewhere between my ears.’ The same would apply to a transgender woman and thus I found the idea of having intercourse with one rather strange. I didn’t know at the time, but my naïve way of thinking was nothing but a version of what is called biological essentialism: the idea that one is born a man or a woman and that we can tell whether one is one or the other by looking at their body.

This seemed like a good place to start thinking of the way in which we misunderstand gender and, imagining that my old self’s worries weren’t too uncommon, I created an anonymous survey asking people the following question: would you have sexual intercourse with someone who had had gender reassignment surgery? I didn’t really care about the straightforward answer to that question, but I presumed that the reason that people would adduce for not wanting to have sex with someone who had undergone GRS would be telling of the widespread misconceptions that structure our idea of gender. Thus, I added a second question to the survey, which read as follows: if you answered ‘No’ to the previous question could you explain why (in as many words you want)? If you don’t want to, feel free to skip this question.

I circulated the survey and got a total of 105 answers from a mainly North American and European audience. This didn’t constitute a problem since the survey’s aim was never to be statistically relevant or representative of any truth but to help me phrase existing (mis)conceptions that exist around the idea of gender.

The first datum that arose from the 105 answers I got was that 63.8% of the people interviewed would not have sexual intercourse with someone who had undergone GRS. Of the 67 people that answered ‘No’, 31 gave an explanation for their answer. 11 of these explanations weren’t particularly relevant for my aims: some were simply confused (and couldn’t explain why they had answered in the way they had), some were aware of their own prejudice (and almost sorry for having said no), some were open-ended (and ascribed their answer to the fact that they wouldn’t be able to judge what they would do without actually finding themselves in the situation). Of the remaining 20 answers, some (too many, in fact!) were openly transphobic, while others betrayed an essentialist conception of gender similar to the one I used to have; all of these pointed in the direction of my original intuition and betrayed a conception of gender which I would now like to critique. 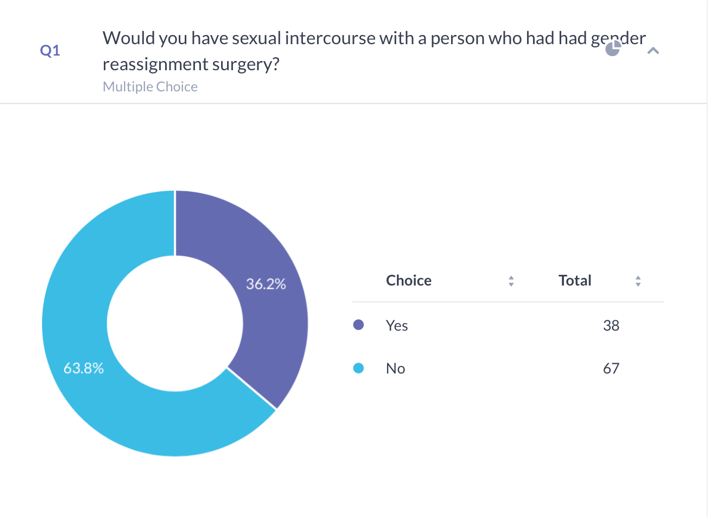 My original intuition was that the reason why some people would prefer not to have sexual intercourse with transgender individuals would be grounded in a misunderstanding of gender, which in turn, would be grounded in a misunderstanding of what it is to be a human being. In particular, I suspected that their rejection would be grounded in some form of mind-body dualism. This must have been what some of my respondents had in my mind when claiming that a person who has undergone GRS is not in their real body. Behind this claim is the idea that humans are a dualistic compound of mind and body, the former being the seat of our identity, and the latter being a mere appendix to that immaterial subject, “as if a disembodied agency preceded and directed an embodied exterior,” to say it with Butler. In this biological essentialist view, by nature we (viz. our self/mind) are born male or female and whether we are one or the other will be shown by what genitalia (body) we have, so to speak, epiphenomenally. In Butler’s words, the popular view of gender is that the latter is “a substantial core which might well be understood as the spiritual or psychological correlate of biological sex.” This being so, a surgical operation, as well as hormonal treatment, that changed our genitalia and our appearance would have no bearing whatsoever on our original identity; the mind/self, being immaterial, would remain untouched by a bodily intervention. Further evidence betraying the popularity of this perspective lies in the fact that Americans are still divided over whether transgender individuals should use the public restroom that corresponds to their gender identity. What this tells us is that many people, blurring the lines between sex and gender, consider transgender individuals to be what they originally looked like; if they once had a penis, the thinking goes, deep down it will always be a man who will be sharing the restroom with me although she now is/looks like a woman – and vice versa.

Paradoxically, this is not too dissimilar to the seemingly opposite way in which some transgender individuals talk about themselves. Consider, for instance, Caitlyn Jenner’s claim that “all along she had a ‘female brain’”, which on the surface seems to be in sharp contrast with a biological essentialist position. In fact, such a claim also buys into an essentialist view of gender, though one that accepts the possibility of dysphoria (i.e. ‘a female brain’ in a male body or vice versa) but still holds that one is male or female and at most is ‘born in the wrong body.’ That gender is essentially determined and fixed, indeed, is bound to follow from the assumption that gender is a thing, an element of reality (be it a ‘female brain’ or an epiphenomenal consequence of the genitalia we are born with), rather than a mere performance, “a stylized repetition of acts,” as I would like to suggest in line with Butler. Let me clarify that I am not attempting to school transgender people on how they should talk about their identity, what I am trying to say is that it makes as little sense for me to claim that “I have always been a man” as for Janet Mock to claim the she “was always a girl”. De Beauvoir’s question echoes in our heads: “qu’est-ce que une femme?” what is a woman? As does Vanessa Place’s: what is a man? One isn’t a man or a woman, one always becomes one; “[one compels] the body to conform to an historical idea” of woman or man, as put by Butler.

Gender is a cluster of expectations regarding what a person should do and how they should do it in virtue of what they look like. As such, gender is primarily a category that (like any ‘identity’) sits outside of us and is realised in our encounter with the other, and that is fulfilled through performative acts on our part; “without those acts there would be no gender at all.” Gender has nothing to do with the structure of the human being and the transgender experience, by challenging our heteronormative schemes, has the virtue of making this palpable. It would be a waste, therefore, to make this experience fall under the same misconceived categories as the cisgender experience. As nicely put by Gherovici, “gender transition is not just a movement between categories: it also offers new positions between and beyond existing categories.” Several people’s ways of life don’t align with the gender performances we would expect from such bodies; bodies that in themselves would be just that: bodies, which have no identity, no gender, and at most have a sex insofar as we understand ‘having a sex’ to mean ‘having genitalia.’ The way in which bodies are gendered today, whereby some actions are only germane to a specific kind of body, is a source of suffering for many and can become a prison for some.

Rather than thinking of the transgender experience as representing the movement from one absurd essential to the other (male to female, or vice versa), and in line with the idea that we don’t have a body but we are a body – that, as Butler puts it, we do our body – the transgender experience should be inscribed, at the material level, in the wider phenomenon of technological transformations of the human body that is common far beyond the case of GRS, and, at the psychological level, in the never ending possibilities of gender transformation that are made possible by gender’s nature as a series of acts.

Take The Next Step

To apply to any of our Bachelor's programs (Except the Bachelor's Program for Adult Transfer Students) complete and submit the Common App online.

To apply to any of our Master's, Doctural, Professional Studies Diploma, Graduates Certificate, or Associate's programs, or to apply to the Bachelor's Program for Adult and Transfer Students, complete and submit the New School Online Application.